For me, Chippewa was a debacle. What I do now will decide whether this race is a tragedy or merely the prelude to a transformation. Maybe I'll know by the time I finish writing this post.


I'd had several weeks of excellent training in January and February and entered a bunch of races in expectation (or perhaps just hope) of a return to ultramarathoning. March and April, however, found me back where I'd started. Easy workouts, when I could do them at all, were slow and usually terminated early. Along with the usual injuries (Achilles tendinosis, plantar fasciitis), something structural in my left knee had given way and I couldn't diagnose it; rest did not help. Then I developed prostatitis, a condition more uncomfortable and embarrassing than painful - long runs were punctuated by urinating more often than a woman in the late stages of pregnancy. A week prior to Chippewa, I caught a cold that's been going around and I just lazed about, hoping to recover enough to be able to race.

Frankly, I was worried. This was not just my first ultra since DNF'ing at the same race in 2013, but this was my longest run since then and perhaps the first time I'd go beyond 20 miles in the past 6 years.

It was cool race morning, 41 degrees in St. Paul at 4 AM, but not raining, as had been a possibility. I drove through Wisconsin, calling "moo" to cows left in pasture overnight (including some Brown Swiss, which mean a true dairy) and listening to the lyrics of songs to see if there were any portends.:

"I feel faint like an old ass flashlight
I don't remember how I got there" - Atmosphere, "Ringo"

"I feel empty, I feel tired, I feel worn
Nothing really matters anymore" - Ryan Adams, "To Be Without You"

I really should develop a pre-race playlist. This is bad juu-juu.

Stopped to pee twice, which I hoped was more coffee than prostate. Otherwise, the trip was uneventful. Sand Creek is a town you don't need to visit.

Right away, Bob Marsh got a photo of me in a typical mood:
I caught up briefly with a bunch of people, some of whom I hadn't seen in years and one guy who lives 1/2 mile from me (we should've car-pooled). I had the same pre-race jitters I've had since, well, 1969. We got lined up for the start, were given instructions and no one wanted to be up front, as usual.

The start is down a long hill that's a killer when finishing. At the bottom of it, I found myself by
a bunch of runners that would finish two hours ahead of me even if things went well.
[Photos are by Mike Wheeler, unless noted otherwise.]

This wasn't so much a ridiculous fast start as it looks, though it was faster than planned and ultimately ridiculous. I eased back, waiting to be passed by people until I was more where I belonged. I did the first miles just ahead of Timothy Owata and one of the first women finishers, recalling Tim had done Afton in about 5:10, so thinking that a typical slowdown for me would bring in me in about 6:00, which was what I expected. I checked my heart rate monitor, expecting 145-150 and it was 155-160 between 2.5 and 5.0 miles, so I was working way too hard on the downhills (not letting my heart recover) and I decided to shift back yet another gear, knowing early errors are deadly.

The course has few landmarks, particularly in the first and last 10 miles, all run up and down moraines and along kettle ponds (and you should know what a kettle moraine is - essentially tiny glacial lakes with ridges in between). 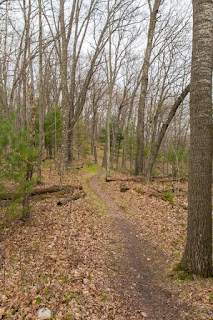 Because there's no real natural landmarks, you start to think in terms of bridges and road crossings. A week after the race, you'll remember maybe 3-4 roads though there may be 8, and 2-3 bridges, though there are two dozen. 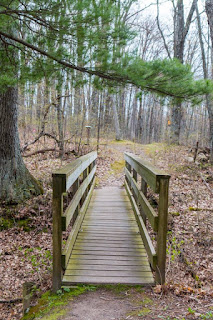 My left knee was making a "clicking" sensation, as if a tendon were sliding from one side of a bone to another - impossible, yes, but I can't say what it was - it wasn't a problem if I thought about landing with my left foot toed-in slightly and if I didn't lift the foot medially past mid-line on the upswing. This isn't a big deal, but it required diligent concentration (for hours).

There is one grassy area among all the hills, at about 10 miles, which I think of as "the meadow," though it's not a meadow and there's a long gravel road downhill past that. This is the focal point of the race. From there to the turn-around, the terrain becomes much tougher - the hills steeper, longer and a little more technical. So, the plan is to run the first 1/3 in control, focus on working the hills in the middle and, once back to the meadow, if possible, race the last 10 miles. 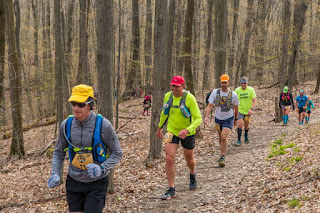 I was starting to feel the uphills a bit at about 10 miles, at least it seemed like they affected me more than others. Bill Pomerenke passed me at almost exactly the same place he had in 2013 and went on to a very solid finish, about where I hoped to be for the Afton 50K in July. I hit the 25K turn-around in 2:45 and felt pretty good, considering, and thought a sub-6 finish was not unlikely.

I let a few people pass me between 16 and 20 miles, feeling a slight unease. I was starting to go downhill with my legs landing straighter and stiffer than they should, a sign of serious muscle fatigue. Things went downhill in more ways than one. Between 19 and 21, my pace slowed, though my heart rate remained the same, the sign that a major problem was coming. This turned from a slow race to a training run just like that.

It was here I tripped for the third time - no falls, so my balance has improved! - and my hamstrings took a serious blow keeping me upright, aching with each step for a bit.

At 21, I hit death march. Survival shuffle.  Same pace up and down hill, with heart rate slowing continuously to what I felt I should be able to maintain for 100 miles. My heels were hurting, as were my plantar fasciae. I also noted that I hadn't had to pee during the race, so I was probably dehydrated as well as having run out of muscle glycogen. I was starting to feel overdressed as well (I'd thought before the race that, if I tanked, I'd need more clothes to keep warm; I was wrong). My back didn't hurt, so all the work I'd done on posture helped.

I was getting passed by a continuous stream of people, the first expected and then some that have never been anywhere near me in a race. I ran mostly by myself, which was what I wanted, because I needed hard focus to keep the pain manageable. Oddly, my mood wasn't bad. I actually thought: "my mental health is a lot better than it used to be." If I hadn't hurt so much, it would've been enjoyable. This was not conveyed by my appearance; after the race, one told me "I didn't think they'd let you continue at the last aid station." Oh, come on, it wasn't that bad.


After the race, people immediately started to greet me and I just needed a few minutes to decompress. [Sorry, Bill, silence is better than anything I would've said just then.]


I didn't even break 7 hours (7:00:58, I think). Personal worst by almost an hour. The next day, I was still hurting, but able to go down steps forward. Today, only my right hamstring's really sore. I may run tomorrow. This is where a decision gets made: I don't want to hurt like this again and there's two different ways to ensure that: 1) Stop running. 2) Train better.

Once again, great seeing you on the course. It's where you belong. Keep taking what your body gives you and you'll be back. I also liked that new shirt you wore! I think I need one of those too!

I too was entertaining the "stop running" vs "train better" debate most of the last 12 miles.