Drabnyr, sub-deity of lands parched by sun and wind (non-desert department) and Umma, queen of the miasmal breath of jungles and swamps, were joined in an unbreakable embrace. Thus it was declared that they would be forced to dance together in that embrace until each of the 7 hills of Afton were climbed 700 times in 7 hours. This appeared to be an impossible task; even the Old Ones of fable, like Sir Nigel of Finney, who climbed those hills in his sleep, could not accomplish it and there were none of those giants to be found in these days. There was a rumor that the last of the Old Ones, Steve the Quick, was buried beneath the Mountain of Injuries and so a party set out to unearth him. When he was recovered, he was not the hero for whom they sought any longer, but he had grown wise in his years. He told them, "The decree does not say that it must be done by one man. You need an army of thousands to climb one hill apiece."

Armies were expensive to hire in these times and the task of organizing so many arduous. Storkamp, Lord of Arrowhead, said he could find 200 to climb each hill twice, another 400 to climb each hill once and yet 100 more to supply the climbers with ice water brought in from the arctic tundra. Soon people were arriving in Afton from a thousand miles away, just to take part in the great quest. They got Lundo the Magnificent and Borst the Kid; they also got unlikely heroes with names like "Wayne" and "Randy" and "Clem." They got teenagers and grandparents, men and women, experienced athletes and excited beginners.

But all was not well. Lady Eve, wife of the Duke of Rembleski, was struck ill and could not take part. Some trickster had placed stuffed crows among the food. Trees had to be removed from the trails between the hills and paths created by machine through the tall grasses. Parking was limited.

Undaunted, the legions headed out to complete the task, Lundo setting a course record on his way. In all, 360 were able to complete the hills once and another 167 did it twice. That made for a total of 694 hills done in the heat, just short of the goal.

They'll have to try again next year.

[All photos "borrowed" without asking.] 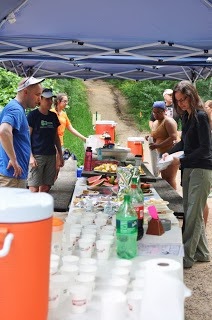 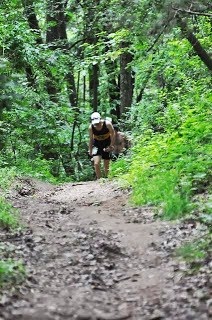 Maybe it's my heat addled brain, but this cracked me the hell up.

I love this! Fantastic writing, Steve!

Awesome description! One of the most fun posts I've read in a long time!

Ah, Steve the Quick, do not overlook that at least 7 lowly sweeps climbed the hills, once a piece, to close the race. Dare I say that makes 701 hills done?

Ed - not under 7 hours! I overstated the number, by counting all finishers of the 50K.